The European Organization for Nuclear Research, known as CERN is an international organization whose purpose is to operate the world’s largest particle physics laboratory, which is situated in the northwest suburbs of Geneva on the Franco–Swiss border.

2018 : The second power converter 26V – 20kA used for test facility and as the spare unit of the Compact Muon Solenoid power supply in the LHC.

EEI received from CERN the “CMS Gold Award of the Year 2004” for the best Italian Electrical Supplier of the 2004. 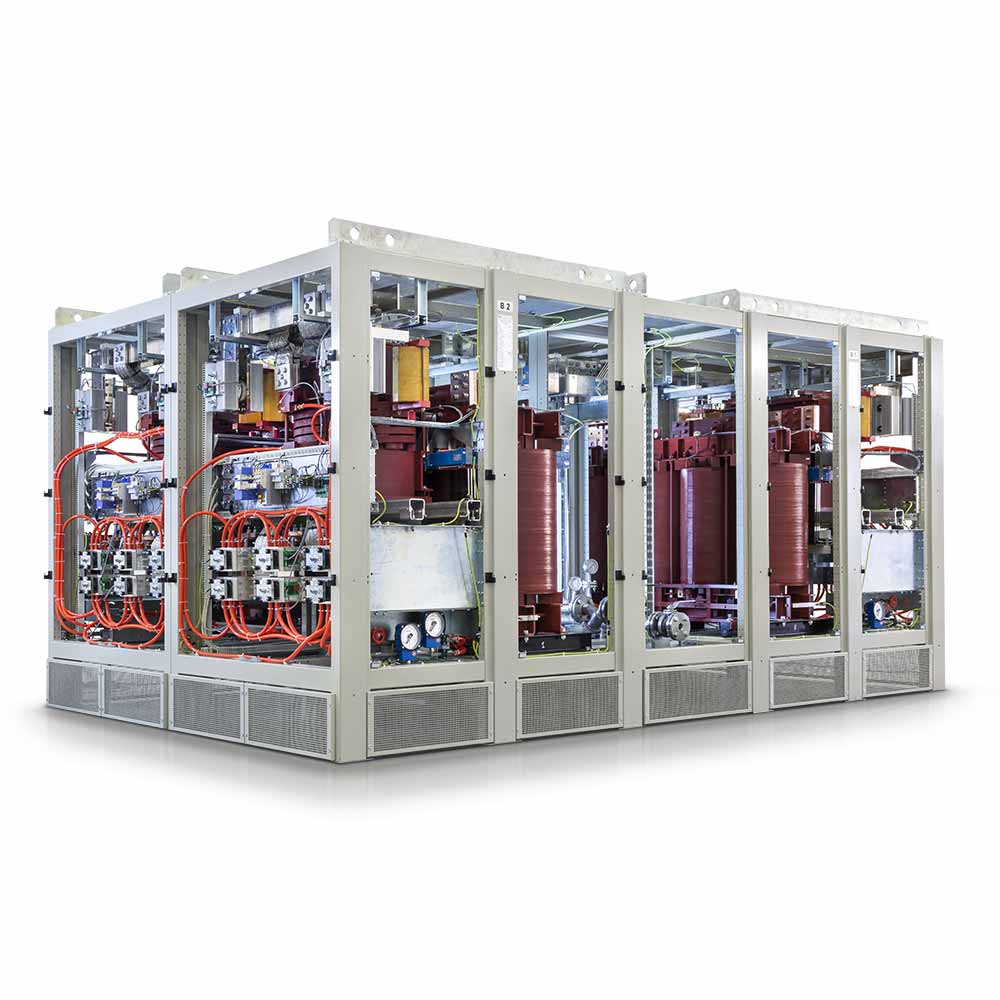 A set of complete racks of water-cooled, 3U, 0-60V-0-160A, low-ripple (< 10mV peak) DC power supplies were provided to the ESRF (Grenoble, France) to supply an experimental solid-state RF ampliﬁer. The racks include power and water distribution to the power supplies, a general and individual circuit breakers and a digital ﬂowmeter with a water temperature measurement, interlocked with the power supplies.

The power supplies feature an Ethernet interface, along with custom digital I/Os and remote voltage sense. 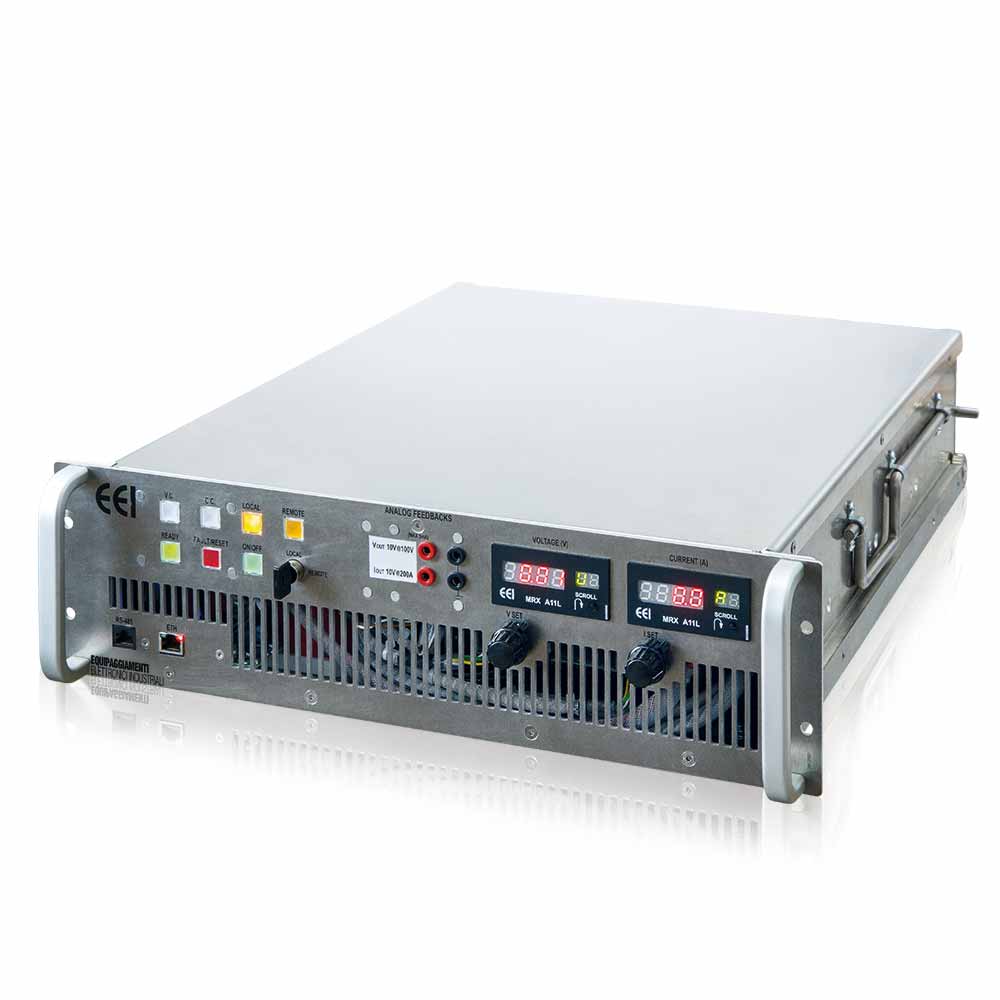 ESS is a new facility, the European Spallation Source  is a European Research Infrastructure Consortium (ERIC), a multi-disciplinary research facility based on the world’s most powerful neutron source enabling scientific breakthroughs in research related to materials, energy, health and the environment, addressing some of the most important societal challenges of our time.

In 2019 EEI provided n° 144 Bipolar power supplies for the corrector magnets of the most intense neutrons source in the world. The ratings of the power supplies: 16A-22 Vdc. 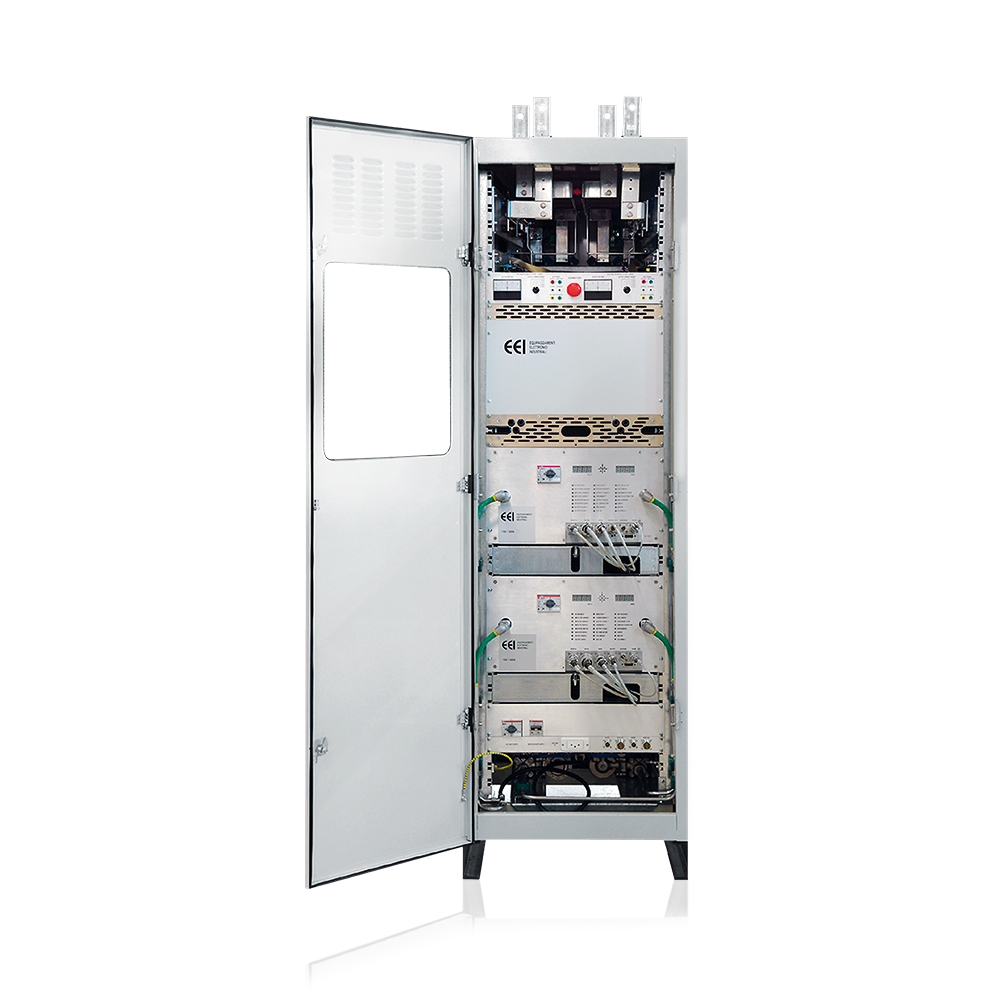 The European XFEL is a research facility in the Hamburg area, Germany. From 2017 on, it generates extremely intense X-ray ﬂashes to be used by researchers from all over the world.

EEI has been awarded for the supply of diode rectiﬁers with nominal voltage 60V or 120V and nominal current from 500A to 2400A.

A set of switched-mode power supplies were provided to DESY, Germany. They feed the beam dump magnets of the European XFEL. Each free-standing cabinet features two ±140 A, ±130 V outputs. The two output currents are sinusoidal and 90° out of phase, so that the beam follows a circular path on the target. High maintainability was achieved through N+1 redundancy of the key components. 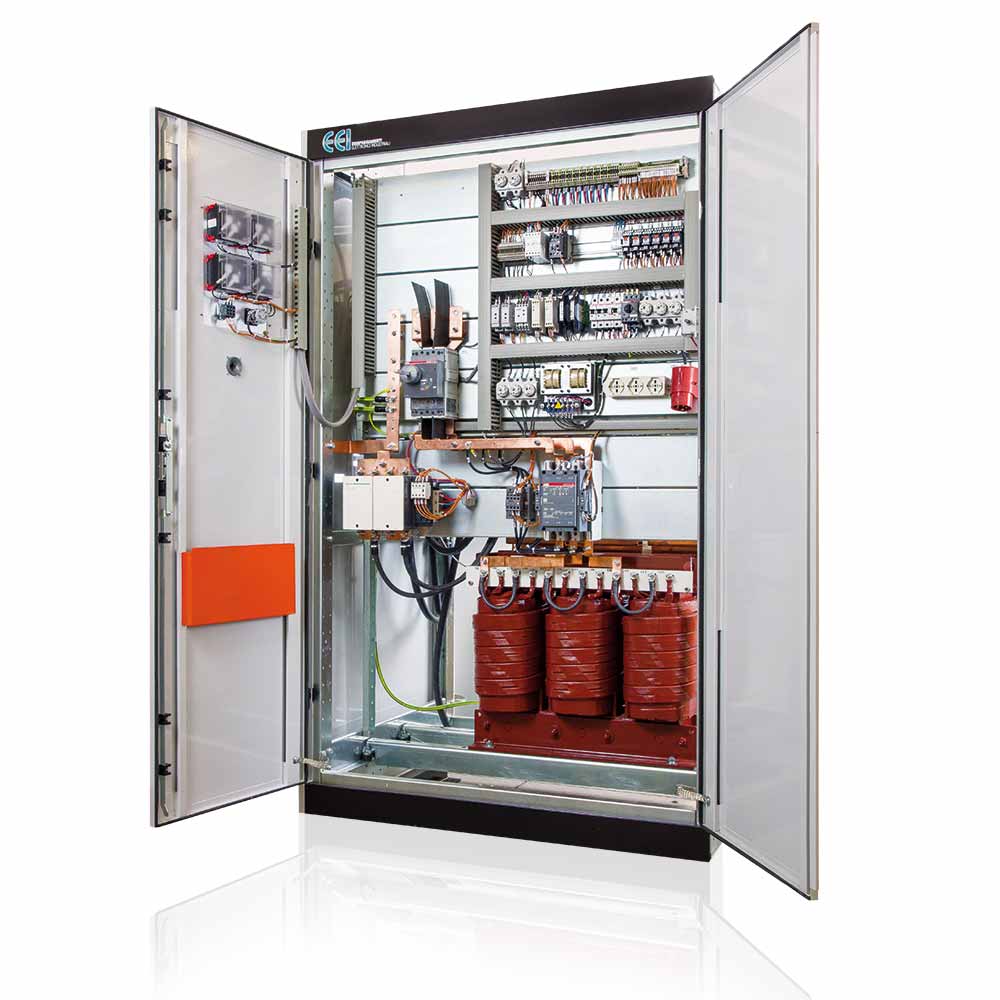 LNGS (Laboratori Nazionali del Gran Sasso) is one of the major INFN (Istituto Nazionale di Fisica Nucleare) laboratories and is the largest underground laboratory in the world. It is located under a 1.400m layer of stone under Gran Sasso d’Italia mountain, in the nearby of the town of L’Aquila. The OPERA experiment has been designed to perform the most straightforward test of the phenomenon of neutrino oscillations. This experiment exploits the CNGS high-intensity and high-energy beam of muon neutrinos produced at the CERN SPS in Geneva pointing towards the LNGS underground laboratory. EEI supplied two power supplies for the OPERA experiment spectroscope. Every magnet power supply is composed by two power supply units (rack), each of them containing a 20Vdc/1700A supply.

– DC Power supplies for dipoles 300A, 100Vdc and quadrupoles 90A, 15Vdc of the beam test facility (BTF) for daφne accelerators system in Frascati (Italy). 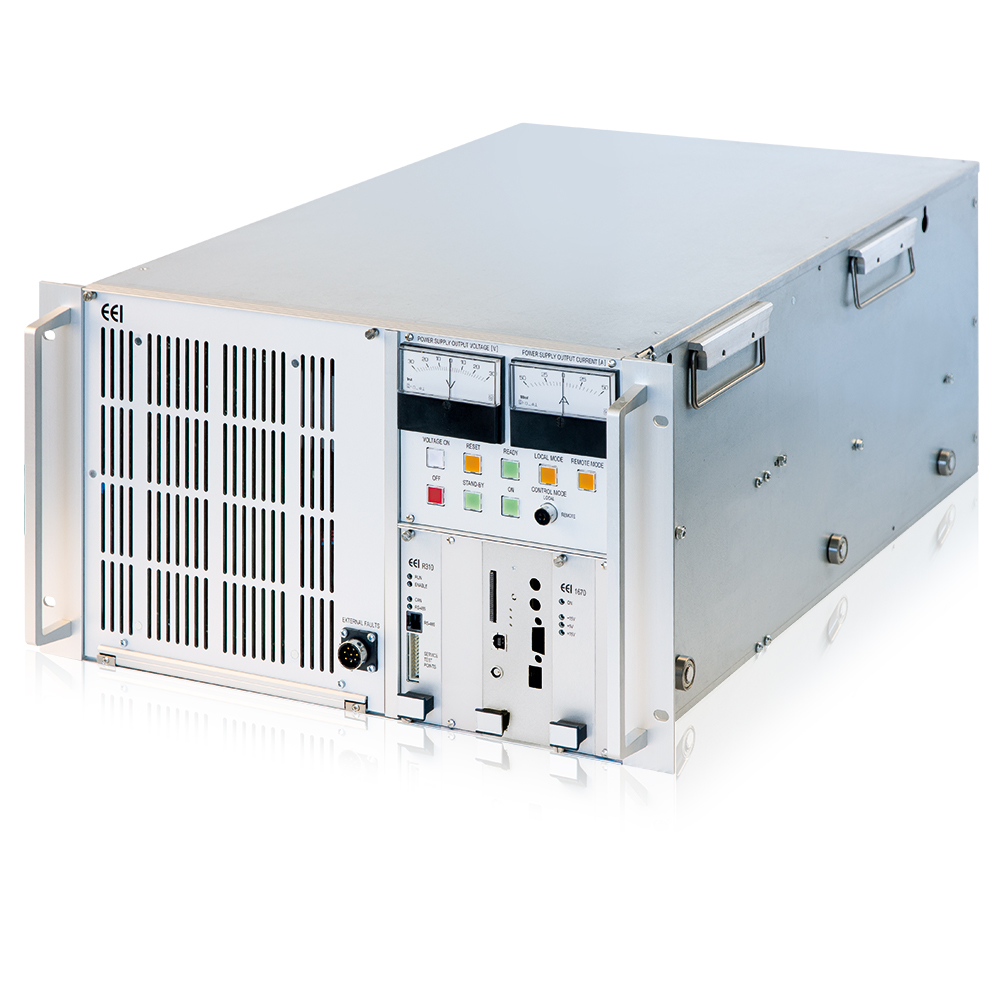 Elettra is an international multidisciplinary laboratory specialized in synchrotron radiation and its use in the science of matter.

It is located in Basovizza on the outskirts of Trieste and is operated by Sincrotrone Trieste.

The laboratory features a 2.4 GeV, third-generation synchrotron radiation source, also named Elettra, and a fourth-generation light source based on a free-electron laser, FERMI@Elettra.

For Sincrotrone Trieste EEI designed and manufactures set of 2 AC/DC power supply for the magnets dipoles, with nominal current of 750A at ±55Vdc. 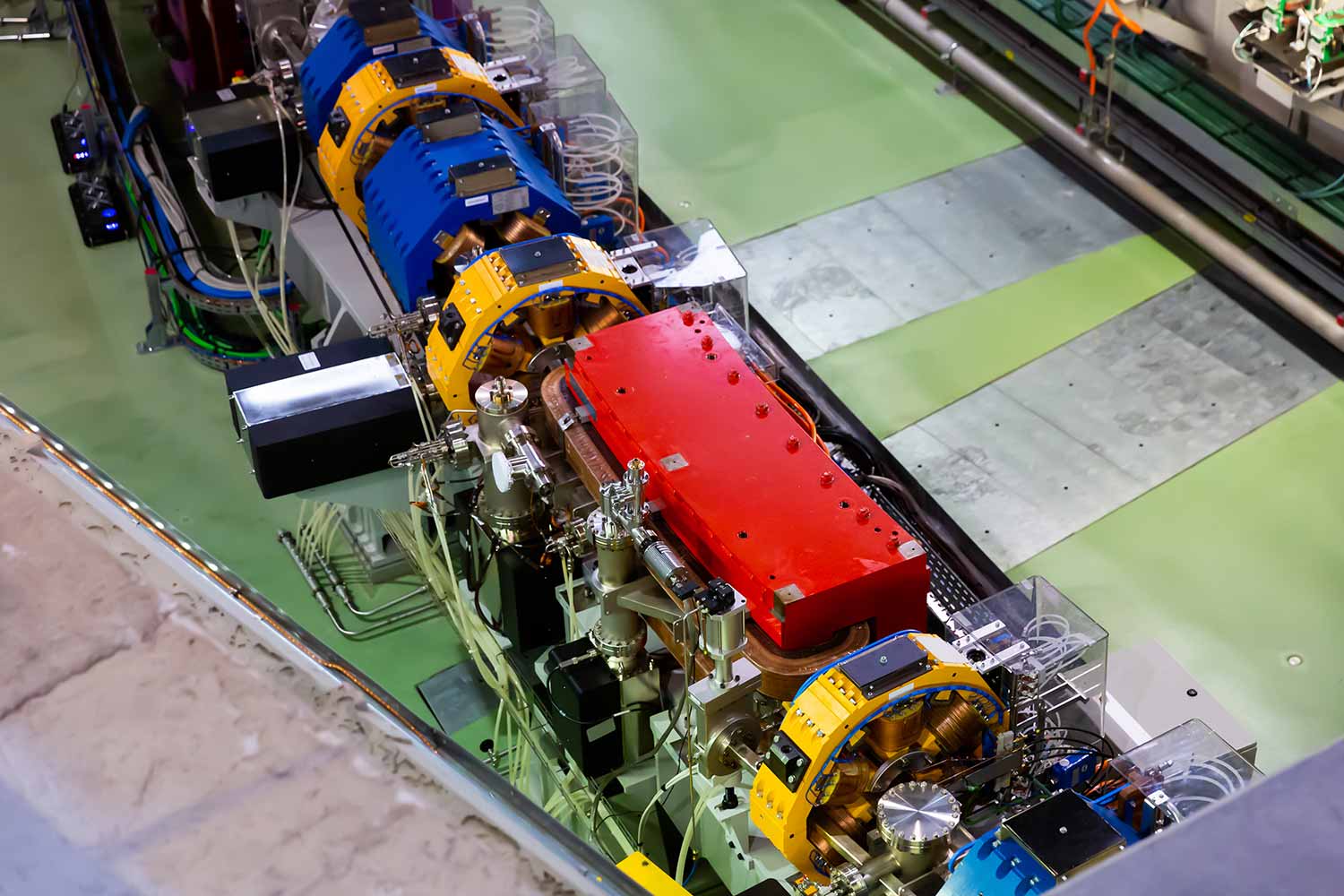